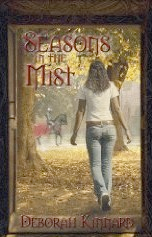 Seasons in the Mist

Stranded in 1353 Cornwall, American graduate student Bethany Lindstrom knows she must find a way back to her own time or face a life of falsehoods and peril.

But with the stern overlord Sir Michael Veryan, she is swept into the intrigues of King Edward’s court, which will test their mettle and their faith in God to the limits — and forever bind their lives together

Where did the idea come from for Seasons in the Mist?

I first wrote this book in the early 80s, after I’d spent a week in Cornwall. I had all the time to ramble, inspect, dream that I wanted. I visited an area near Truro that had a tiny area with lumps of stone — obviously it’d once been a building, but there was no clue what it had been.

My imagination made it a ruined chapel near a holy well. The book built itself around Michael and Bethany’s visit to that well.

Have you visited any of the places you write about in this novel?

See above. I love Cornwall.

Tell us a little about Book Two in your series, Seasons of Reckoning.

RECKONING tells the story going forward, the same year in the present but three years on in the past (time travel has some funny rules).

Marcus Richards, Bethany’s college professor and mentor, travels to England to find out what’s become of Bethany. He deliberately uses the portal, believing she’s traveled in time — and then the fun begins.

In 2012, you began a new series called The Faith Box, with the first entitled Peaceweaver. You now have two more books in that series to be released this year. Will you tell us the basis of this series?

A shameless borrowing from a friend of mine who told me of a “bag o’religion” some of her buddies shared. The bag became a box — a reliquary — in my imagination, and the “Faith Box” series was born.

I wanted the first one, PEACEWEAVER, to tell the story of a young woman sold against her will into marriage, before the year 1000. The next two books, THE HEALING TREE and WHEN THE ROSES BLOOMED, tell the stories of the young women who inherit the Faith Box and the challenges of faith they face.

If you could choose actors to portray your main characters, who would they be?

I love Amanda Seyfried and several of my characters “look” like that. For the guys, they do always seem to look a little like Matthew McConaughey or the younger Alex Baldwin. I like the tall, boy next door types.

If you could travel back in time, what time period would you visit?

Fourteenth century like Beth, or perhaps another? Wow, that’s tough. Probably 10th century — the 14th is too dangerous, with all the famine and plague.

Of course, if you read Connie Willis you realize that every century is ranked a “10” for peril, warfare, and human beings being vicious toward one another, so maybe there’s no way to choose.

If you could choose any location in the world as your writing spot, where would it be?

Cornwall. Definitely. The north coast, where the valleys snug in between the cliffs. I don’t know if that house is still there, but there was a tiny B&B in a house once owned by Claude Rains, the movie actor. I’d live and write in that house near St Agnes.

Is coffee your preferred drink or do you care for a spot o’ tea?

Both, actually. Though don’t bother talking to me before my first cup of whatever in the morning!

For more information about Deb and her books, visit her website at www.debkinnard.com.

To read my review of “Seasons in the Mist,” click here.